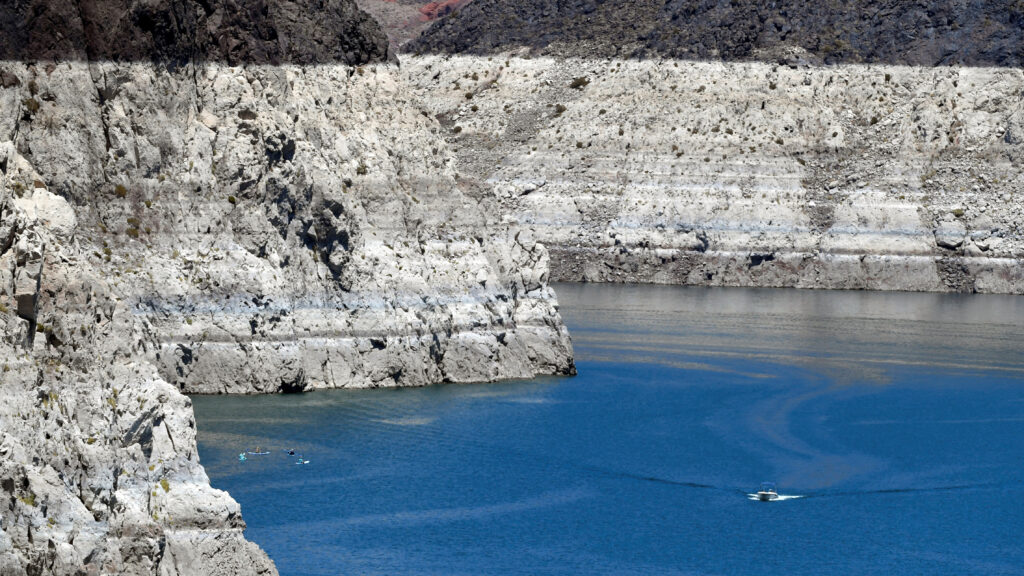 Severe drought threatens to dry up the Colorado River Basin. So, on Tuesday the US government put historic water-use restrictions in place. Two southwestern states and Mexico are affected.

Restrictions were increased to "Tier 2." It's the first time that's ever happened. The new restrictions go into effect in January. Arizona, Nevada, and Mexico will have to use even less water than they do now. Since 1944, Mexico has had a treaty with the US. It allows them to use water from the Colorado River.

Arizona faces the deepest cut. Its yearly allotment of water from the river will drop 21%. Nevada must cut water use by 8%. Mexico has to cut water use by 7%. California is spared from the 2023 declaration for now. That could change if the water levels at Lake Mead reach 1,045 feet above sea level or lower by January. Lake Mead is a reservoir on the Colorado River.

Lake Mead is projected to come close to that mark. The Bureau of Reclamation predicts it will reach 1,048 above sea level by 2023. The bureau estimates that Lake Powell, another lake, will fall to 3,522 feet. Both are within several dozen feet of “dead pool” status. That's a point at which there won’t be enough water to power their dams. This could result in a loss of power for millions of customers.

“In order to avoid a catastrophic collapse of the Colorado River System and a future of uncertainty and conflict, water use in the Basin must be reduced,” said one official.

Officials say a lack of rain and snow in the area in the past year has made the problem worse.

Question
The author’s purpose for writing this article is to _______. (Common Core RI.5.6; RI.6.6)
a. educate the reader about a drought that threatens to dry up the Colorado River Basin
b. inform the reader about new water-use restrictions on two southwestern states and Mexico
c. predict how drought will affect certain regions in the US and Mexico over the next 50 years
d. A and B
For more formative assessments, visit thejuicelearning.com to start a free trial.
Related Resources

This video is about the global freshwater crisis and its relationship to climate change.

National Drought Mitigation Center at the University of Nebraska-Lincoln

This interactive map and summary provide up-to-date information about the state of droughts in the United States, Puerto Rico, United States Virgin Islands, and some Pacific Islands.

Extreme Weather and the Climate Crisis: What You Need to Know

This e-book explains the relationship between climate change and extreme weather events such as hurricanes, floods, drought, wildfires, extreme heat, and extreme cold.